100 Day Countdown to the Capital Challenge 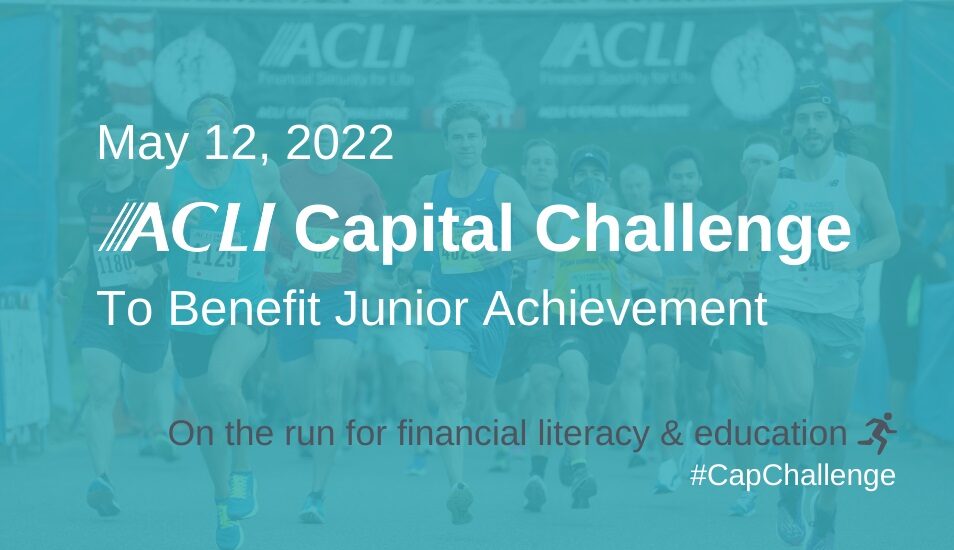 One hundred days from now, America’s life insurers will join our nation’s leaders on the run for financial education and literacy at the ACLI Capital Challenge.

The ACLI Capital Challenge road race has become a time-honored tradition in our nation’s capital. Competitors from the executive, legislative, and judicial branches of the federal government, plus media organizations, run and walk in the three-mile race. This year’s event at 8:00 a.m. on May 12 will be the 40th time that Washington D.C.’s power brokers have laced up their sneakers for the race.

Funds raised from the ACLI Capital Challenge go to Junior Achievement USA to support its financial education and literacy programs for students throughout the United States. Each year, Junior Achievement reaches more than 2.5 million students in all 50 states.

Through our partnership with Junior Achievement, life insurers are helping to provide students with the tools they need to broaden their understanding and awareness of important personal finance life skills. This is crucial because research shows that improved financial education and literacy can help close the racial wealth gap.

ACLI sets up Zoom interviews where Junior Achievement students across the nation can discuss the importance of financial education with members of Congress from their states, including Rep. Mike Gallagher (R-Wisc.), Sen. Shelley Moore Capito (R-W.Va.), and Sen. Krysten Sinema (D-Ariz.).

Sen. Capito was the fastest senator. Sen. Sinema, the race’s all-time record holder as the fastest female member of Congress, walked the 3 miles last year due to an injury. But her team was still the fastest Senate squad. Rep. Jared Golden (D-Maine) led the fastest House team.

We look forward to seeing all of them in May. Plus, we hope to see many more former participants as well as plenty of new faces from Congress, the Biden Administration, the judiciary and the media.

We know a lot can happen in 100 days. That’s why race organizers are carefully monitoring guidance from the Centers for Disease Control and local public health officials regarding the coronavirus.

In the meantime, we’re getting everything ready for this year’s Capital Challenge. And if all goes as expected, we will learn in 100 days who are the fittest and fastest leaders in Washington D.C.